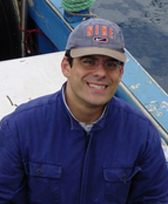 Since 2002 he started with a fellowship and three annual contracts in operational oceanography the collaboration with the oceanography group of the Institute for Coastal Marine Environment (IAMC, Messina) of the National Research Council (CNR) as Research Assistant. He has got his background as physical oceanographer and he has gained a strong background in the analysis of oceanographic data (data processing, visualization and programming). He participated to a large number of oceanographic surveys and cruises (Adriatic, Ionian, Southern Tyrrhenian Seas).

Since 2008 has been dedicated to the consolidated monitoring techniques for systematic observation of environmental parameters, combining experimentation of observation and information acquisition techniques with real-time analysis of acquired data to use in simulation models. In particular, he has worked with IREA - CNR in Naples, with whom he has undertaken the development of innovative techniques for the estimation of sea surface currents or the wave motion reconstruction, obtained by analyse several sequences of images captured by an X-band nautical radar.

Since 2012, he is referent for the implementation of the Italian coastal radar network as a monitoring system for critical sea areas in the following projects: "SSD - Fishing in the Regions of Southern Italy", RItMare Flagship Project with X-band Wave Radar and CALYPSO Project with HF Radar.

His research extends over a range of observational and theoretical topics in physical, operational and computational oceanography (monitoring in coastal marine environments, geostrophic flows calculation, thermohaline circulation of the sea, water mass analysis, relationships between small-scale mixing processes and temperature and salinity distributions; oceanographic data analysis; maintenance of oceanographic instrumentation) and specialization in a number of local marine areas (Ionian, Tyrrhenian and Adriatic Seas in Mediterranean).