A Thermo Fisher Neptune Plus has been installed at CNR-IGG in Pisa, in September 2017. This instrument is equipped with an inductively-coupled-plasma source, a magnetic mass filter and a high resolution multiple collection system 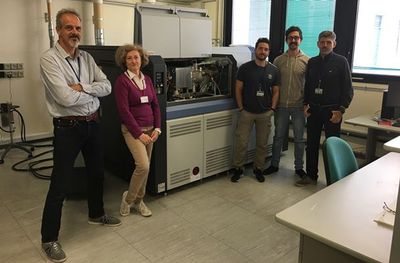 A Thermo Fisher Neptune Plus has been installed at CNR-IGG in Pisa, in September 2017. This instrument is equipped with an inductively-coupled-plasma source, a magnetic mass filter and a high resolution multiple collection system (HR-MC-ICPMS), representing a significant improvement over the thermal ionization mass spectrometry (TIMS) lab that operates at CNR in Pisa since the early sixties. This new machine, the only one of its kind installed at the National Research Council of Italy, fills a gap in frontier analytical research that lasted over a decade.

The former TIMS lab evolves today into the new MC-ICP-MS and TIMS lab, hosting the most performing, versatile and sensitive instrument for isotope analyses. The CNR-IGG, already having strong expertise in geochemistry including stable isotopes, noble gases, radiogenic (Sr-Nd-Pb) and boron isotopes, extends its activities to a wider range of isotope systematics. The new instrument, along with two TIMS and the other IGG labs, allows isotope analyses of the whole periodic table, for applications ranging from Earth and Environmental Sciences to Life Sciences and Isotope tracing latu sensu.

The first goal of the CNR IGG team is to implement methodologies for the analysis of Sr, Nd, B, Pb and Cr isotopes, previously routinely performed on the TIMS. After that, the focus will be on developing new methodologies for the analysis of light elements (e.g. Li), transition and heavy metals (such as Fe, Cu, Zn, Hg) and Lu-Hf, U-Th disequilibrium series. The better sensitivity and the larger productivity of the Neptune Plus will allow for the development of projects requiring large data sets and measurements of samples containing few nanograms of material to be analyzed. This activity is supported by the complementary clean lab (class 1000 and class 100) where chemical separation is performed.

The lab is open for collaborations with the national and international scientific community, looking to attract diverse research projects spanning from basic to applied science.